A photo studio for tourists

In a park specially created for photo tour groups, a model dressed as a traditional farmer walks with a buffalo under banyan trees. The fog created by burning straw and a smoke machine adds to the atmosphere. This scene is one of the most popular among travel photographers. Photo: Gilles Sabrié

«Some mention that everything is staged, most do not»

Photojournalist Gilles Sabrié traveled to a place that has more to do with longing than with reality: in the Chinese region of Xiapu, actors stage an idyll for tourists. They herd water buffaloes across picture perfect fields, row old rowboats across lakes and collect fishing nets, while other employees create artificial fog by burning straw and visitors – from stands and spots built especially for them – shoot «the perfect photo» of a rural romance that doesn't exist. What is this place? Who goes there?

Andrea Walter: Mr. Sabrié, how did you become aware of the Xiapu region and the photo tourism there?

Gilles Sabrié: An employee of a travel agency told me about it. She had heard about a picturesque fishing village in Fujian province and had gone there herself. When she returned, she was deeply disappointed and told me that the whole region had been turned into a photo studio for tourists. I had never heard of such a thing and got very excited about it...

What did you get to see there?

I think it was the biggest concentration of photographers I ever saw. Busloads of them would arrive at one spot, some equipped with the latest cameras one on each shoulder, long lenses, with camouflage jackets or National Geographic-branded vests, and they would all point their cameras towards the same spot while the tour guide would radio instructions to the models in the distance.

One of the most astonishing spots was the woody area where a man dressed as a farmer from 100 years ago, was repeatedly pulling a buffalo through a cloud of artificial smoke. He did that all morning, as one group of tourists was taking over from the preceding one. 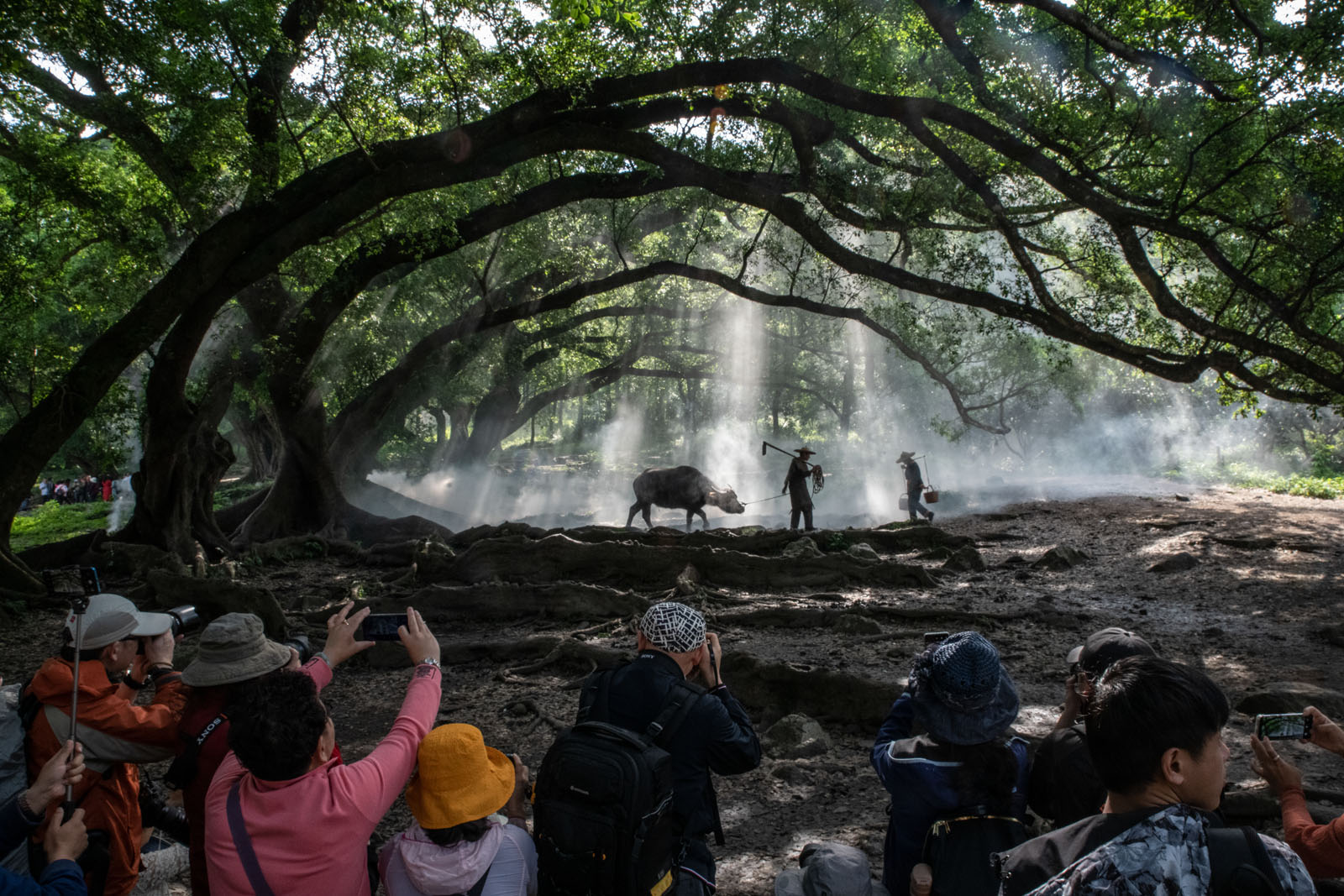 The image in context: staged photos intended to evoke a «China of the past» have become the specialty of the Xiapu district. Photo: Gilles Sabrié

«If this photo is published in a newspaper as an illustration of rural life in China, it is totally wrong.»

How did it come about that an entire region became an open-air photo studio for tourists?

I don't think there was a centralized decision to turn the place into a photo or tourist destination. I believe it was a pretty organic development – with tourists sharing photos of the place on social media, locals turning their yards into photo spots, and then the local government promoting the region as a photo destination.

As a result, there is no one single entry ticket to some kind of photo park, but rather multiple spots which are independently run. Some don't have a fee, but visitors may pay for the «models», while others have entry fees of about 3 euros. Sometimes it is also included in a package that tourists pay for a two- to three-day photo tour. 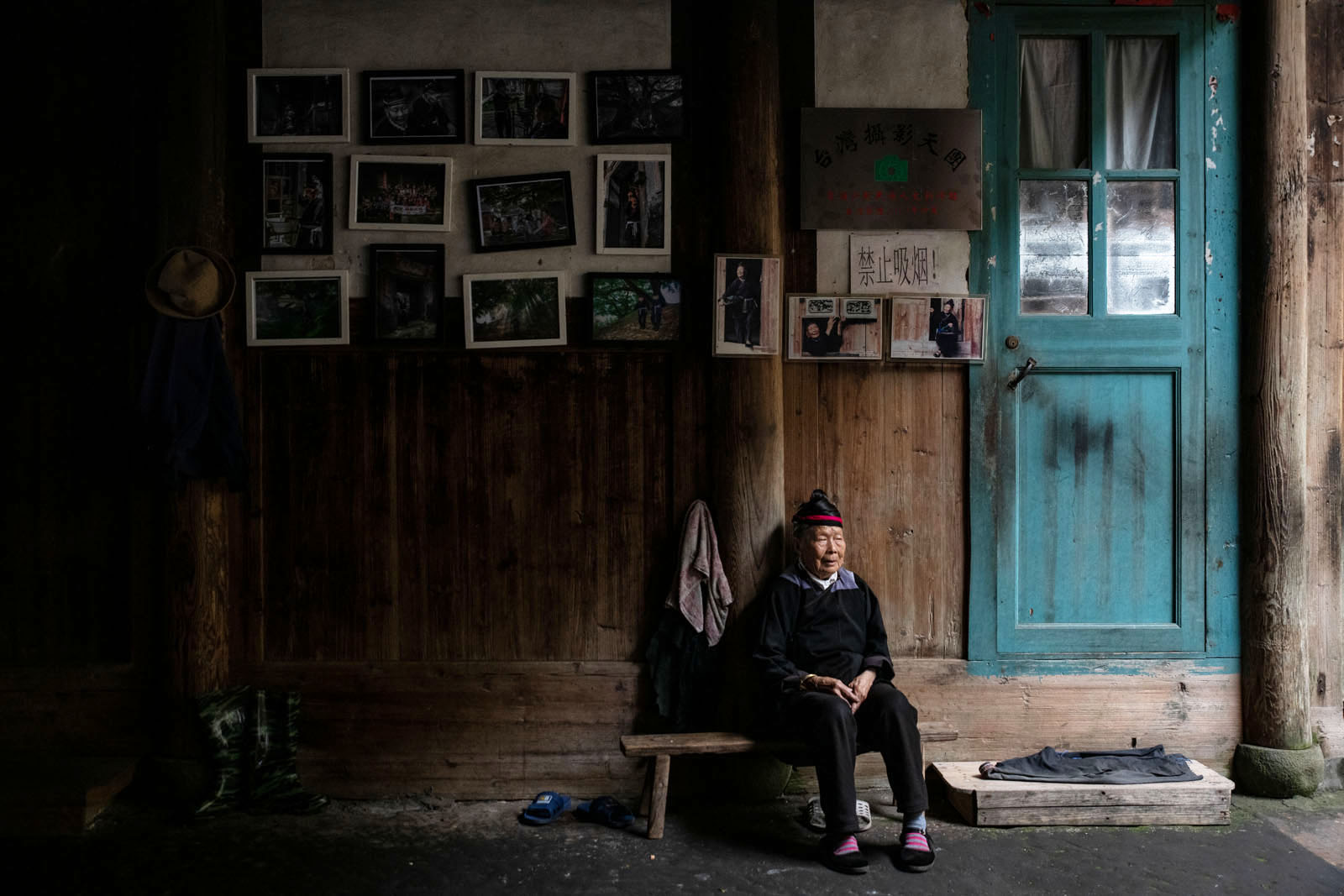 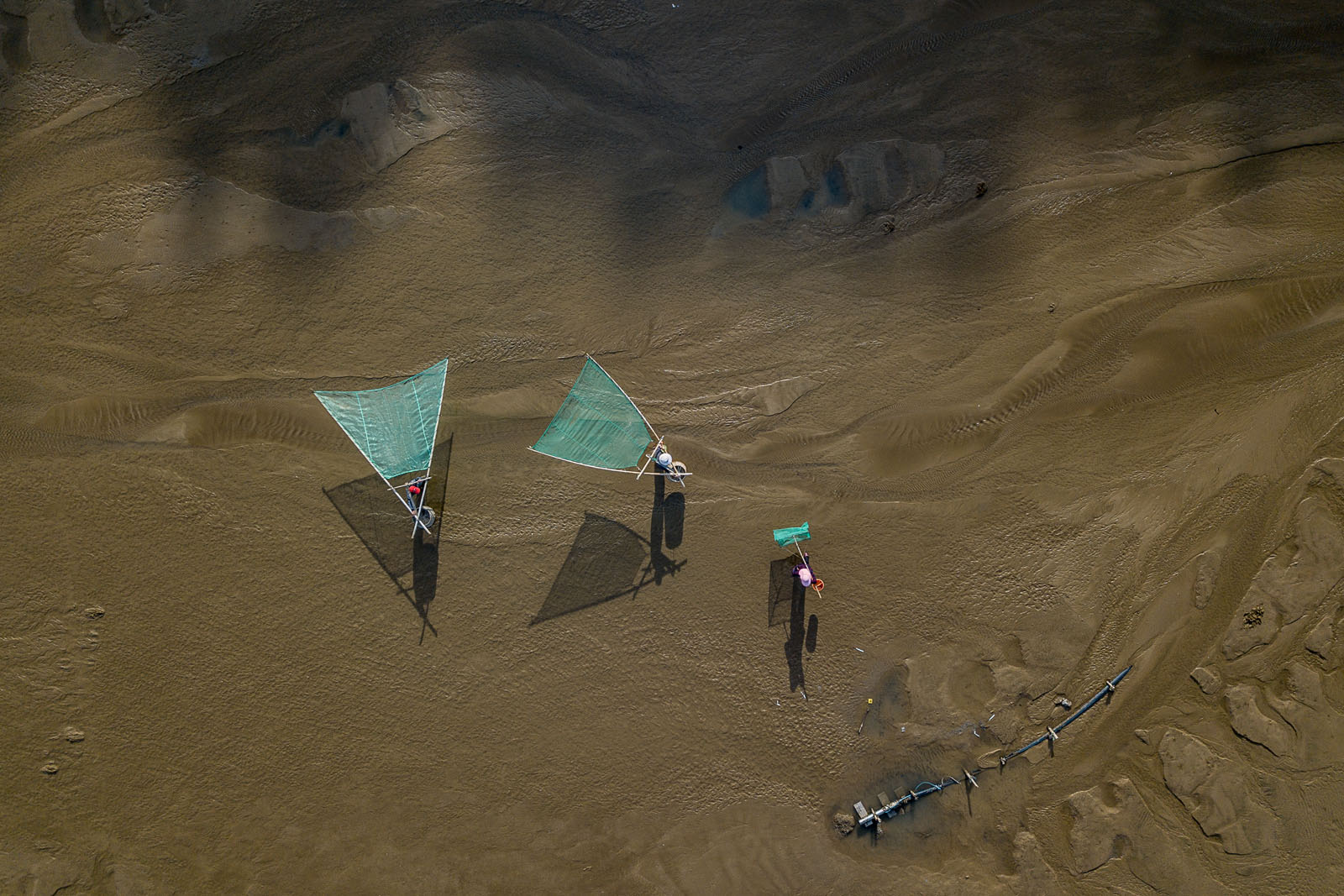 Left: 90-year-old Zhong Lianjiao, who belongs to the She ethnic group, earns her living by posing for photos. Some decorate the walls of her house. The photo groups usually pay her 100 RMB (about 14 euros) per appointment. Right: Three men playing fishermen on the beach and having their picture taken. 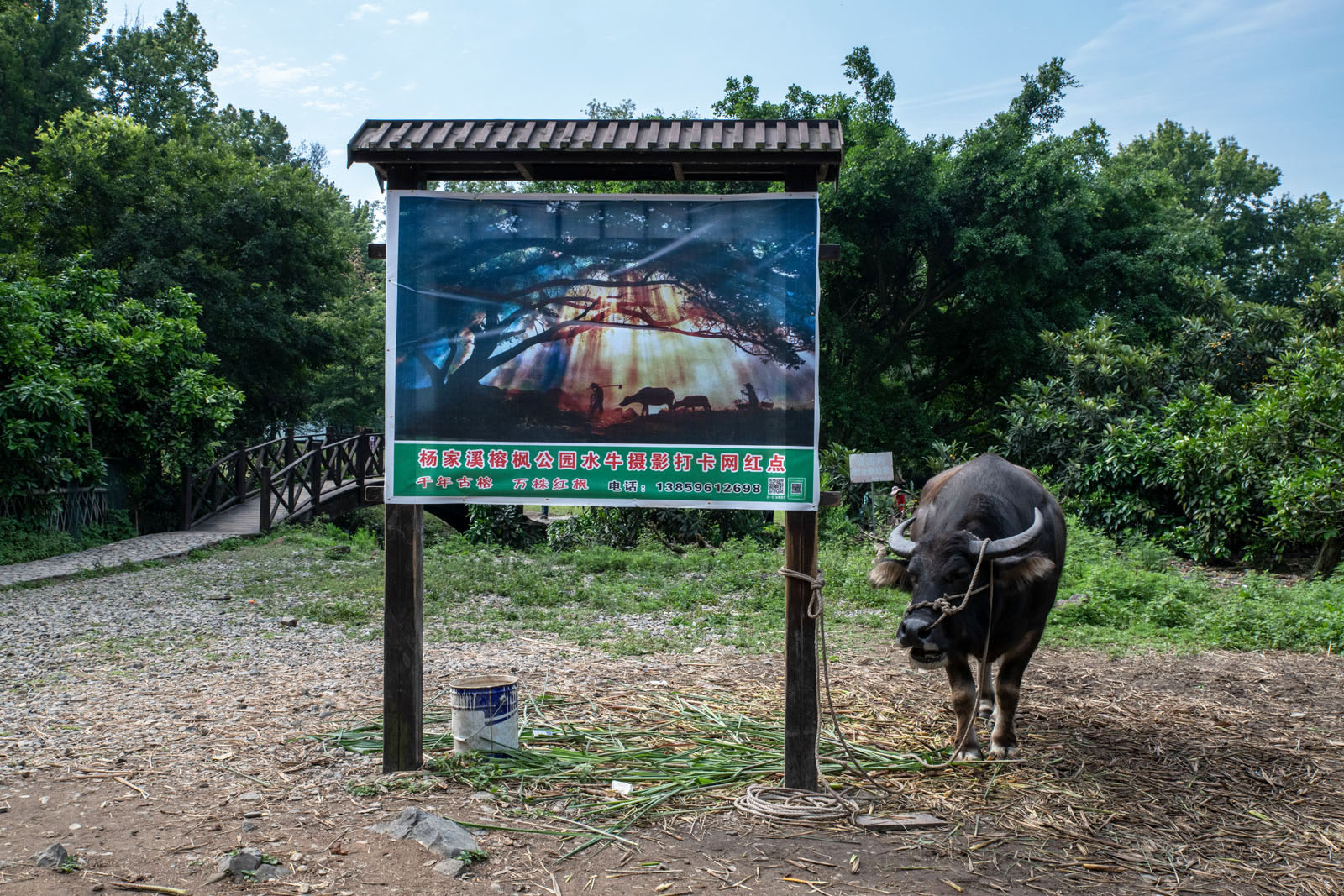 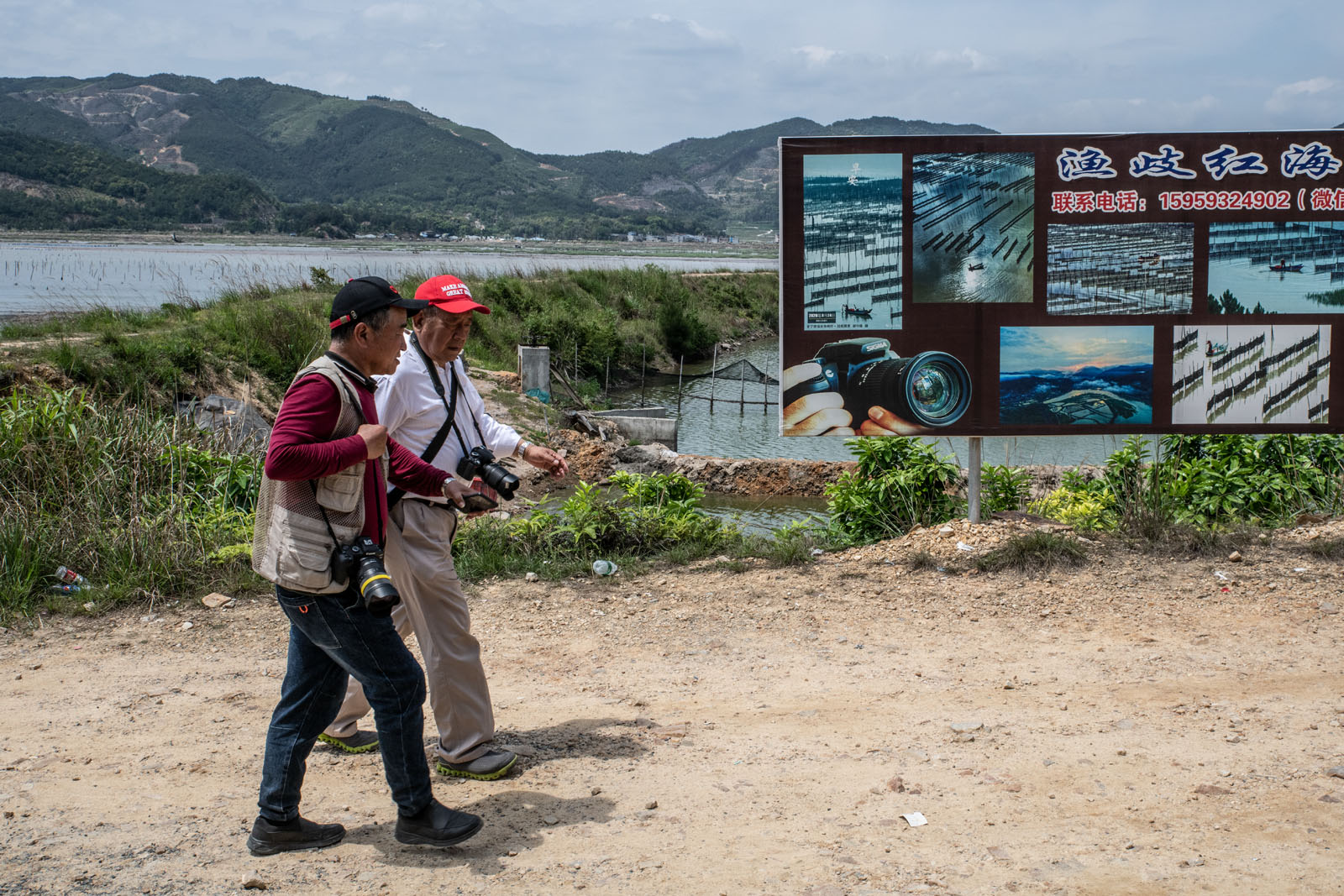 Left: A buffalo takes a break between two photo shoots. Right: Two amateur photographers walk past a billboard advertising potential photo spots on their way back to the bus. Photos: Gilles Sabrié

«Travel destinations are no longer a place where we experience the alterity of life, but have become an artificial stage, a recreation of an idealized world, aimed to feed the social media frenzy and comforting us with the lie that the world is just as we dream it to be.»

How did it feel to be there?

It aroused very mixed feelings in me. Somehow it made me laugh, but at the same time it also made me sad. I thought it was the end of travel as we know it.

Travel destinations are no longer places where we experience the alterity of life, but have become an artificial stage, a recreation of an idealized world, aimed to feed the social media frenzy and comforting us with the lie that the world is just as we dream it to be. But this is probably confusion on my part. Mistaking tourism for travelling. Tourism has always been an illusion: One knows in advance what he is going to get and the locals have prepared it. Xiapu draws a clearer line between being a traveler and a tourist. 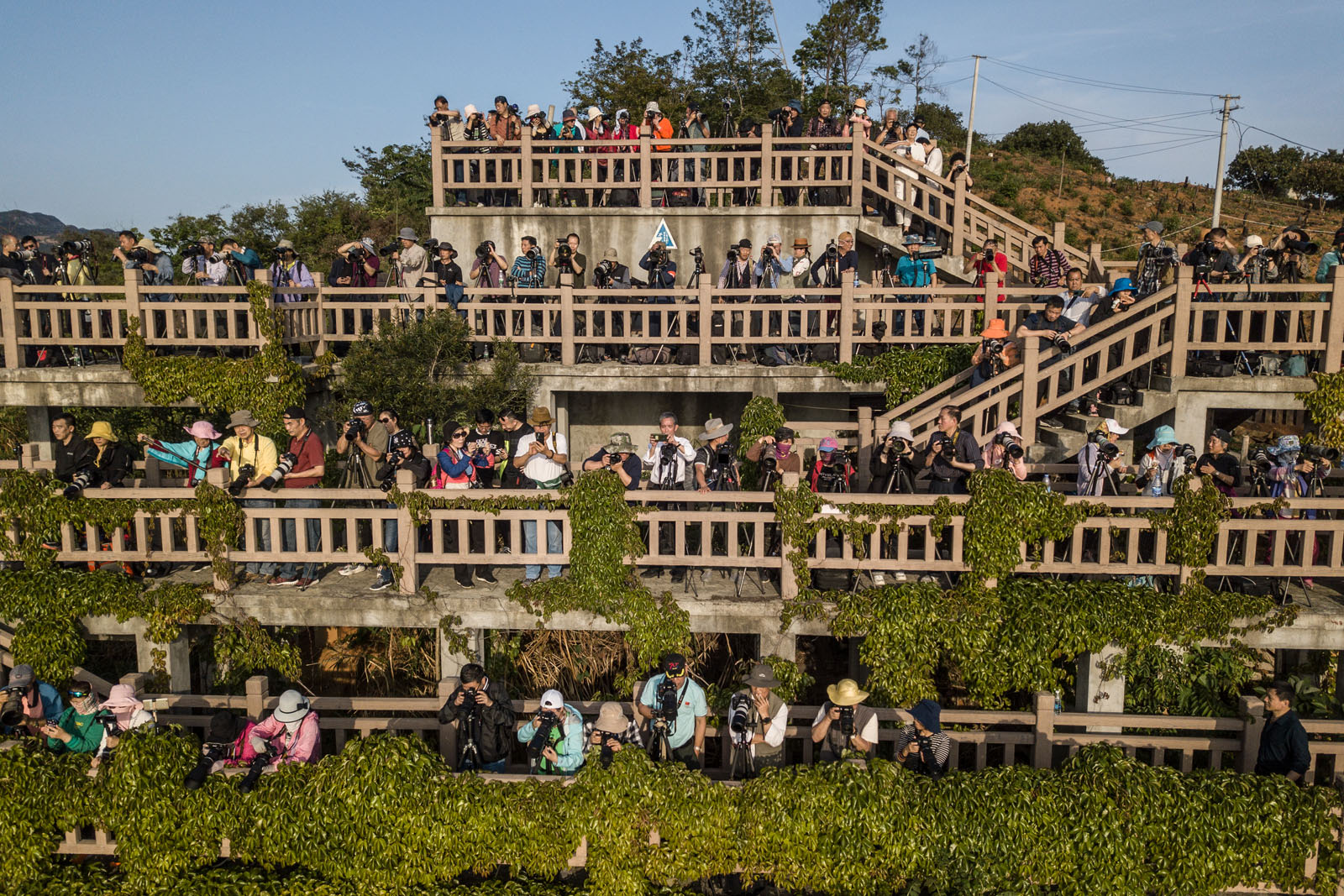 View of a platform full of amateur photographers taking pictures of fishing models on a beach. Photo: Gilles Sabrié

«There are many ways to take pictures, no good or bad ones. The issue is more about the context in which the photos are presented.»

Do visitors know in advance that the photo worlds there are staged?

Some know in advance, some don't, and it can actually be very disappointing when they realize it. At each spot, there are billboards with iconic photos to show visitors what they should shoot. The same images can be seen in brochures, on websites and billboards on the street. So anyone who is there knows what they are getting into. There are no surprises but visitors might be disappointed if what they get to see there doesn't match the photos they've seen before.

Who are the visitors taking pictures for?

I have often wondered where all these pictures end up! Many post them on «WeChat» – the Chinese app that is kind of a mix between Whatsapp and Facebook. Some mention that it's all staged, most don't... 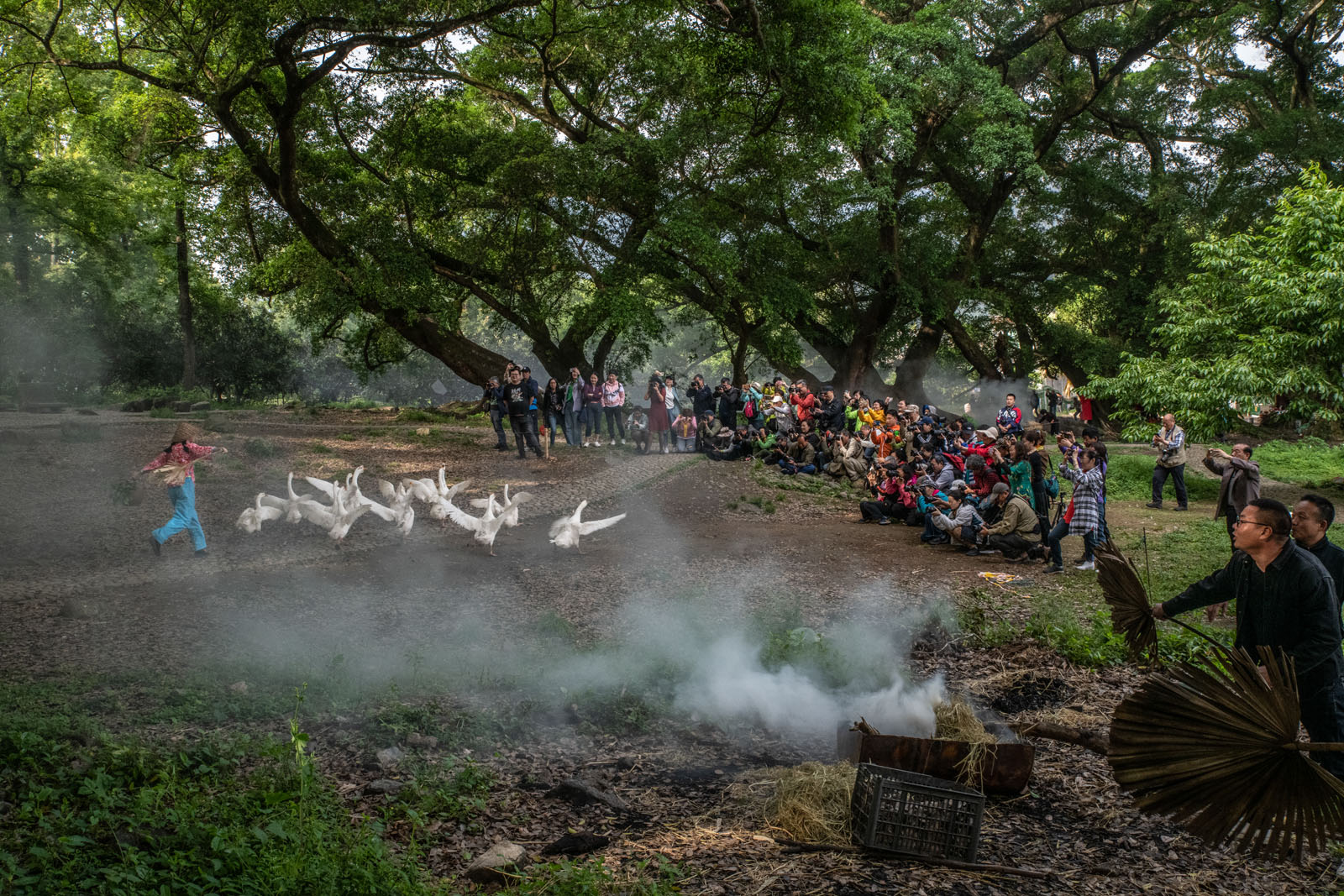 In a park created especially for photo tour groups, visitors photograph a set-up in which a female model walks ducks under banyan trees. Straw is being burned to create a fog effect. Photo: Gilles Sabrié

«The editor is responsible not the photographer.»

What has this experience done to you – especially as a photojournalist? Has it changed your belief in the credibility of images?

It hasn't affected my belief in the credibility of images. Staged photos have existed since the early times of photography – and the technical constraints of early photography made staging necessary.

There are many ways to take pictures, no good or bad ones. The issue is more about the context in which the photos are presented. If the photo of the farmer with his buffalo is published in a newspaper as an illustration of rural life in China, it is totally wrong.

The responsibility lies with both the photographer, who should clearly state in the caption the conditions in which the photo was shot, and with the photo editor who should double check the origin of the image and how trustworthy the source is.

Chinese news agencies often use staged photos for propaganda purposes. These photos are then redistributed by Western photo agencies which assume Chinese photo agencies work under the same rules as they do. They are mistaken. The editor is responsible not the photographer.

Editors find these kind of photos beautiful, and photographers are giving the editors what they want. Why ruin the dream? Tourists keep going there. Tourists are not photojournalists. Therefore, they are not bound by any ethical rules. Does it matter to them if the fisherman is fake or real? I am not sure.

One of the most popular tourist destinations is Disneyland. Maybe we want the world to become Disneyland. We are all responsible for this alternate reality we are creating: the tourist, the reader, the photographer and the editor. This is not so much about the credibility of photography, but rather about how we travel, what we are looking for when we visit alien places ...

«Does it matter to the tourists if the fisherman is fake or real? I am not sure. One of the most popular travel destinations is Disneyland. Maybe we want the world to become Disneyland.» 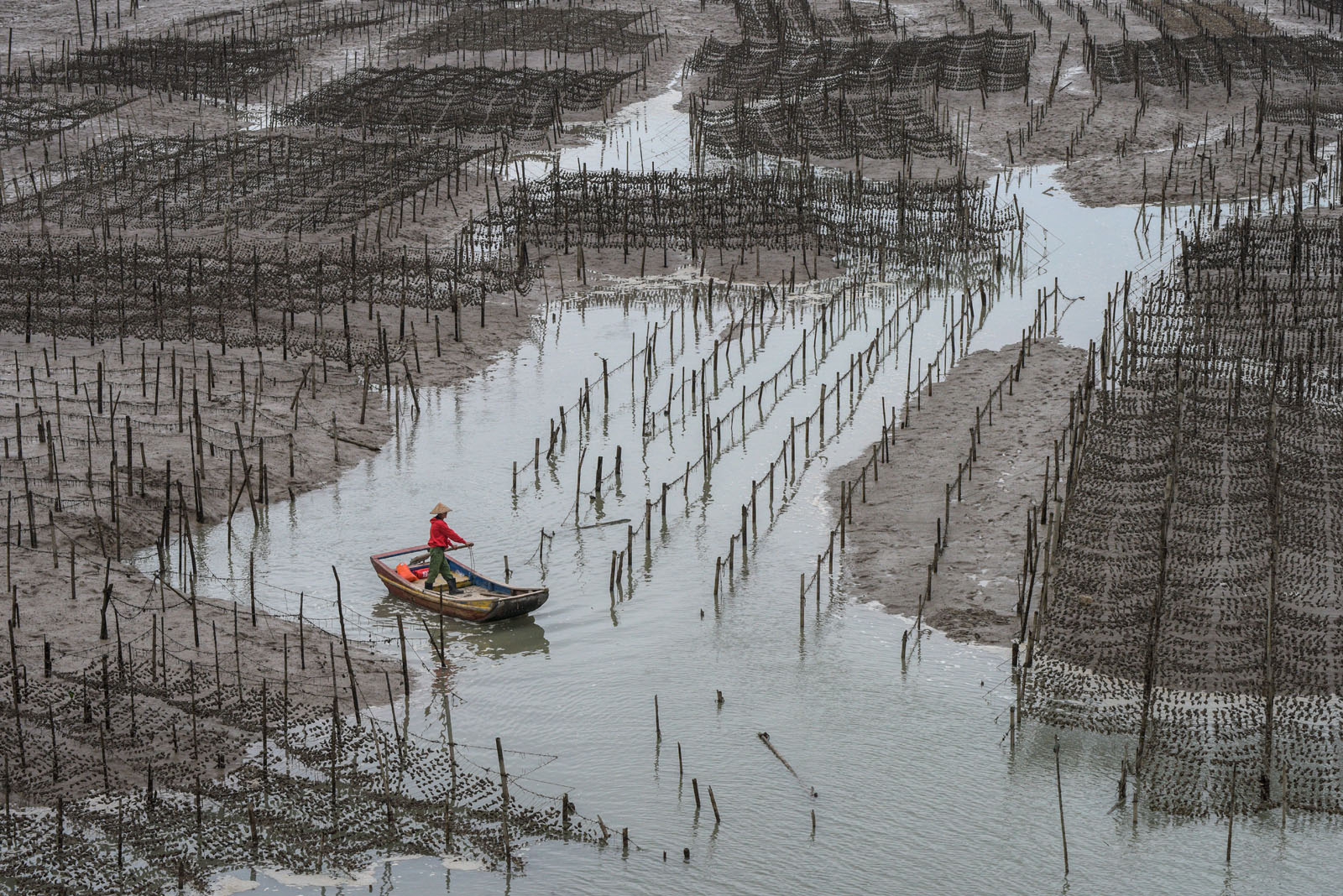 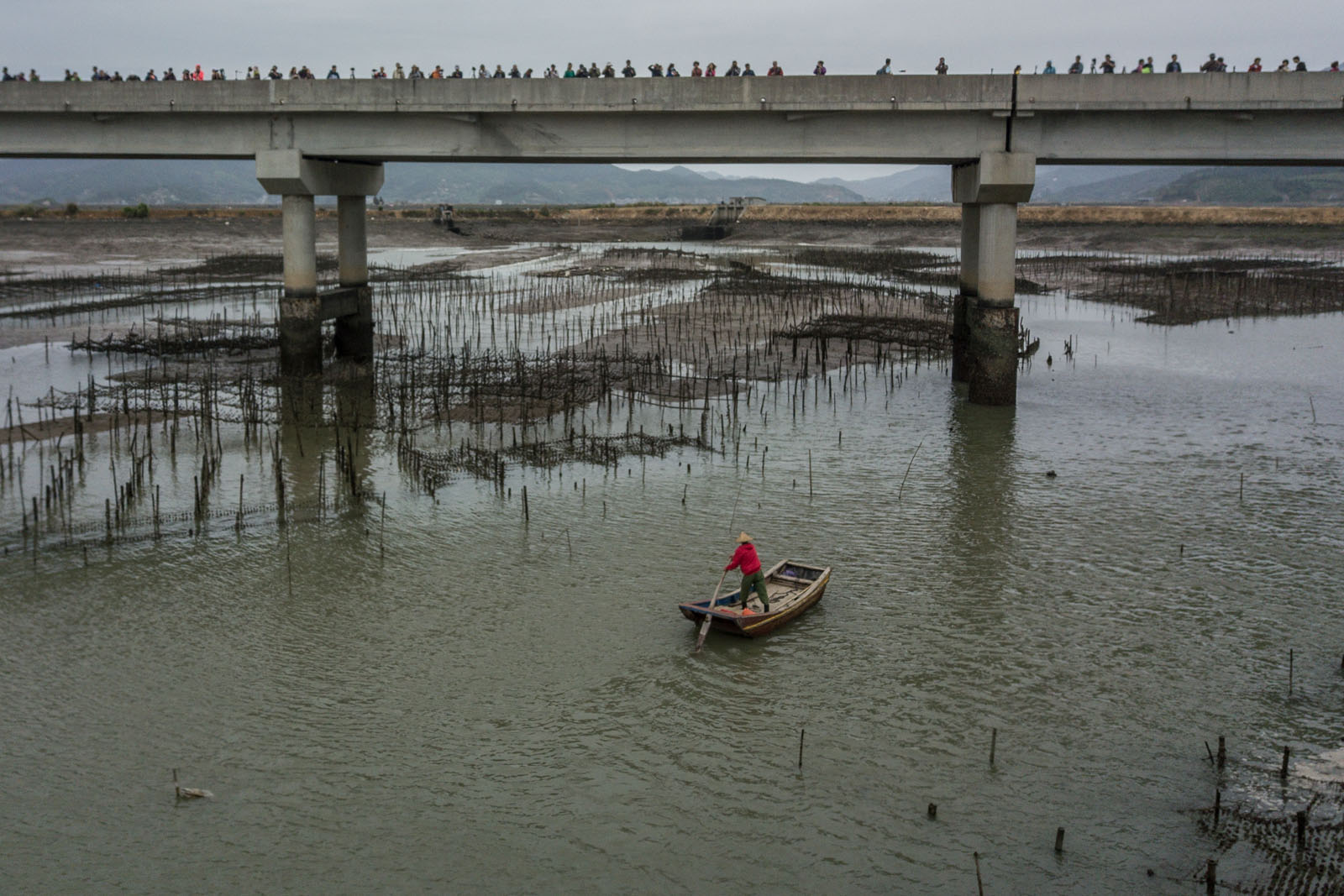 A group of amateur photographers on a tour photographing a model rowing in an oyster farm. The local worker is paid 200 RMB (about 28 euros) to pose on his boat for a few hours for photo-tourism groups. Photos: Gilles Sabrié

If you enter the keyword «Xiapu» in Google, you get numerous pictures of those staged scenes, for example of fishermen collecting the nets. Do the pictures all come from the photo spots or is there still real fishing in the area?

There is still some real fishing going on in the area and the work of the fishermen can be very photogenic. I took some pictures of workers steaming harvested sea cucumbers – that was quite striking. But the tourists just want to replicate what they have already seen. There is no curiosity and what they are offered at the photo spots is safer. By the way, there are also some quite spectacular religious folk festivals in the area, but none of them are part of the photo tours.

The scenes for the tourists often border on kitsch, such as the one of the farmer with the buffalo. Does such rural life still exist in the area? And if so, what does the «real» one look like?

Rural life in the region is quite vibrant, with tea, rice and fruits being grown. However, farmers have stopped using buffaloes a long time ago. The only buffaloes left are the ones for the photos.

Photographer Gilles Sabrié has been documenting change in East and Southeast Asia for over a decade. His work has appeared worldwide, including in The New York Times, The Wallstreet Journal, Le Monde, Time Magazine, Geo, National Geographic, Der Spiegel, L'Espresso, The Observer, The Guardian. Gilles Sabrié lives in Beijing.

The journalist Andrea Walter likes to observe people and find out what drives them. She prefers writing reports, portraits or essays for magazines such as mare or HOHE LUFT, the Tagesspiegel and many more. She is also the head copywriter for the philosophy magazine HOHE LUFT. There she also oversees the texts for the "Philosophical Photo" column, in which photographers are given a philosophical term and respond with a photo and a text. She has also founded the «Detektei für Geschichten»﻿.